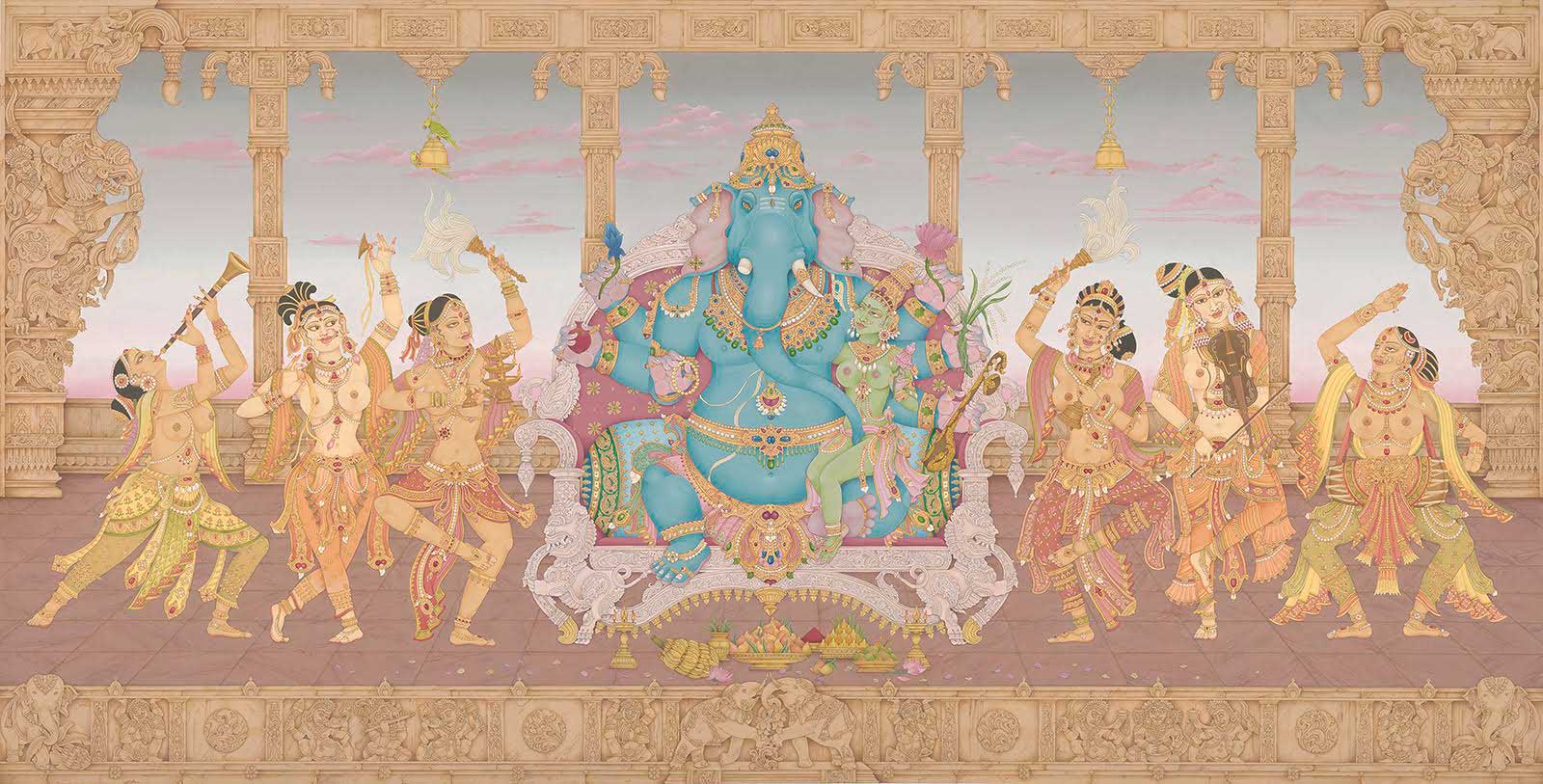 There are several eroticized forms of Ganesha associated with Tantrism. In these Ganesha sports with his consorts prior to union. Although considered left-handed, their iconography can still be found in the sculptural programmes of the great Vijayanagar temples of Tamil Nadu. The famed Meenakshi temple of Madurai has a small Tantric Ganapati shrine.

Ucchista is a term referring to ritualized pollution. The practitioner seeking the Deities blessing worships in a state that breaks one or two of the more common rules governing ritual conduct. Unwashed, naked or both for example.

Ganesha is classically understood as being the awakener of the Kundalini energy located in the muladhara chakra and as being the Lord of beginnings. In this painting His trunk caresses the Yoni of His consort Pushti – awakening the latent spiritual energy with a sensual push. The name Pushti translated in various ways but means something like graceful, easy, sublime. She sits across Ganesha’s thigh absorbed in pleasurable contemplation on Her Lord.

Ganesha’s nupura or skin color in this form is blue – distinct from the usual saffron, reds, and oranges usually seen. Blue in the skin of a deity equates with pure open consciousness – an endless infinity of sky and all the vast perspective that implies. His hands hold various symbolic implements: a finger mala, pomegranate, utpala flower, lotus, rice paddy and veena.

The mala represents mastery of the spiritual science of mantra – the skillful use of repeating a holy sound or phrase, often a Name of God. Pomegranates with their luscious red juice and plenitude of seeds represent bountiful blessings. The blue utpala flower represents night and the unborn mystery of the Divine. The pink lotus indicates the full beautiful awakening of the soul. Rice paddy here represents abundance of growth and fertility of all kinds. The melodious veena represents Ganesha’s mastery of the musical arts and nada yoga – the yoga of sound vibration.

On either side of Ganesha’s elaborate throne, engaged in acts of artful worship, song, music and dance, are six Dev Dasis. These beautiful women are devotedly celebrating Ganesha’s divine status. Dev Dasis were traditionally employed in large numbers of temples throughout India until the British Empire suppressed their activities and defamed them. The whole tradition of classical Indian dance is rooted in the Dev Dasi tradition. These highly trained women were venerated in society as masters of performing arts. They were considered as especially blessed and capable of transmitting the Deities’ Grace.

On the bottom register of the painting within the decorative panel are images of Ganas. These dwarf-like figures are rambunctious playmates of Ganesha and members of his personal army. They are in a sense His troops.