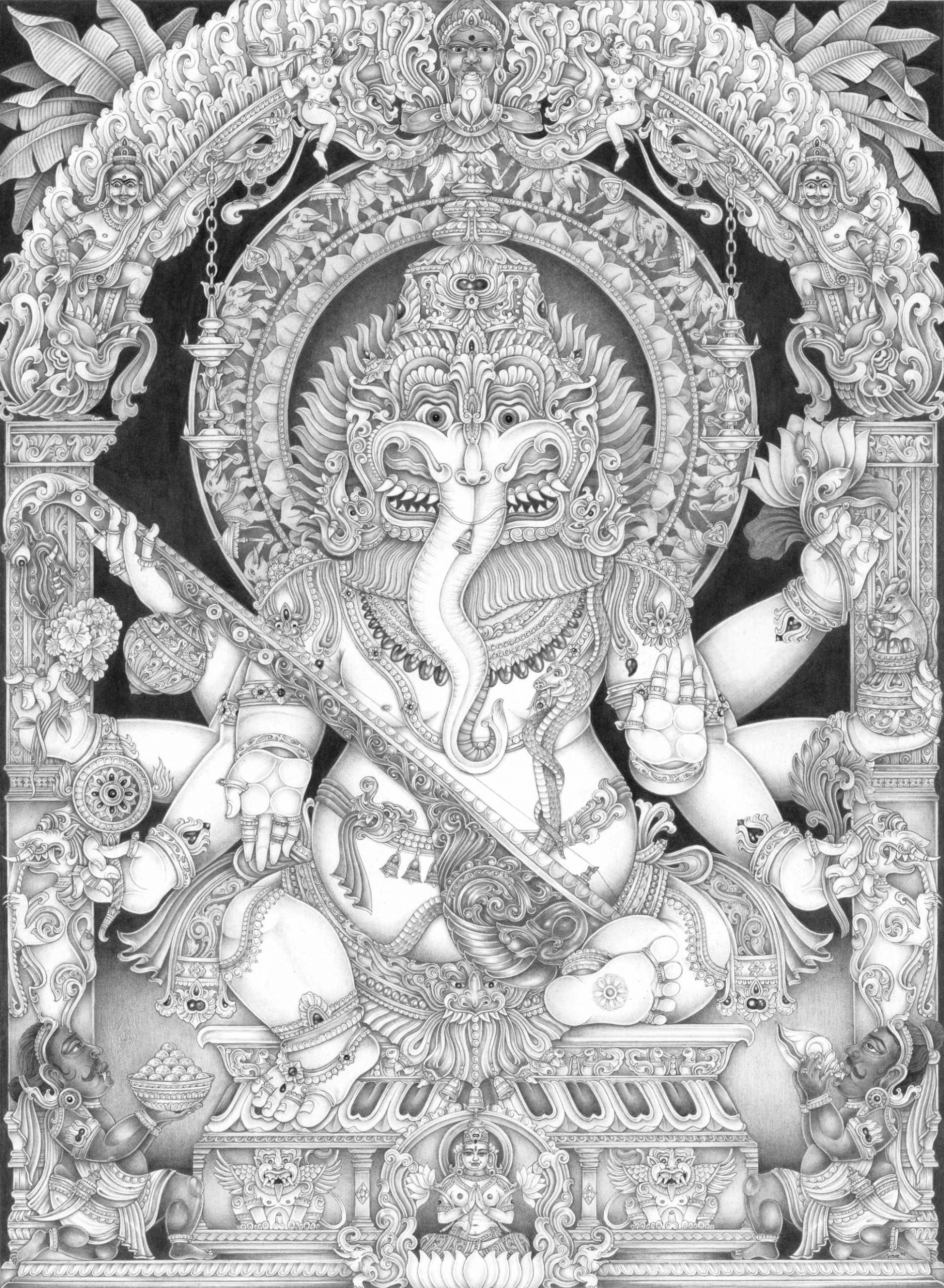 The Sritattvanidhi (Treasure of Realities) is an important iconographic manual of the late 18th century. It was commissioned by the Maharaja of Mysore State, Krishnaraja Wodeyar, to preserve and protect traditional knowledge of iconography in the southern Indian subcontinent. Within the text 32 icons of Ganapati are described, including Simha Ganapati. He is shown more often simply riding a lion. However, in this remarkable form, Ganesha’s face has merged with that of a lion. His huge bulging eyes, ears and sharp fangs are all depicted in the Indian tradition of the mood of that ferocious beast. Simha Ganapati is rarely depicted in this manner. I know of only one temple at Nanjangud in Karnataka that houses His murti. There are also a few representations in the Kalamkari painted cloth tradition from Kalahasti in Andhra Pradesh. However, the distribution of their attributes differs from that of the Sritattvanidhi which I have used as the source reference.

In His upper right hand, Ganapati holds a veena, signifying His mastery of arts and music. He plucks the string from which the primordial sound and all creation emanates – Om. The veena is carved with a graceful swan, emblem of the Goddess Saraswati and symbol of the effortless Sahaj state. In the hand beneath, a bunch of fragrant flowers is held, representing beauty, and that Ganapati readily accepts as a humble offering – even a few wildflowers offered with love are said to be immensely pleasing to Him. In fact, simple fresh grass is often given as prasad to Him. Simha Ganapati holds one ayudya (weapon) and it is the regal jeweled discus or cakra usually associated with Vishnu. Very briefly, it represents eternal dharma, the severing of egoic attachment and solar might. His lower right hand is displayed in Varada mudra offering Divine boons and favors.

Simha Ganapati’s upper left hand holds a fresh day-blooming lotus – the universal image of the purified heart. Beneath is the Ratnakumbha – the pot of jewels. Ganesh is described as an inexhaustible treasure trove – the possessor of all wealth, internal and external, without whose blessing no wealth can be possessed for long. It is His association with riches that brings Him into intimate relationship with the very embodiment of wealth: the Goddess Lakshmi, depicted in a small shrine of her own at the bottom of the image. Under the Ratnakumbha, Ganesh holds a sprig from the Kalpataru (wish-fulfilling) tree. This divine foliage from the paradisical realm of the Gods is indicative of His association with all that is miraculous, magical and natural. The bottom left hand is in Abayha mudra, the gesture of granting faith and dispelling fear, doubt and darkness.

From all these implements, which taken as a whole inform us of any Deities’ unique Divine function, we can see that, although wrathful in visage, Simha Ganapati is a rather peaceful and refined form of Ganesh. Again, this is emphasized by His white body color described as shining with the softness of the full moon. Portly Ganas (dwarf attendants and troops in Ganapati’s celestial army) blow the sacred conch and make offerings of modakas – His favorite sweet of roasted sesame seeds, ghee, jaggery and rice flour. Overhead at both sides, stepping out of the gaping mouths of makaras, heroic warriors hold aloft burning temple lamps. Surasundaris (pleasing Divine maidens), resting on the tongues of further makaras, blow trumpets, heralding Ganapati’s awesome presence.