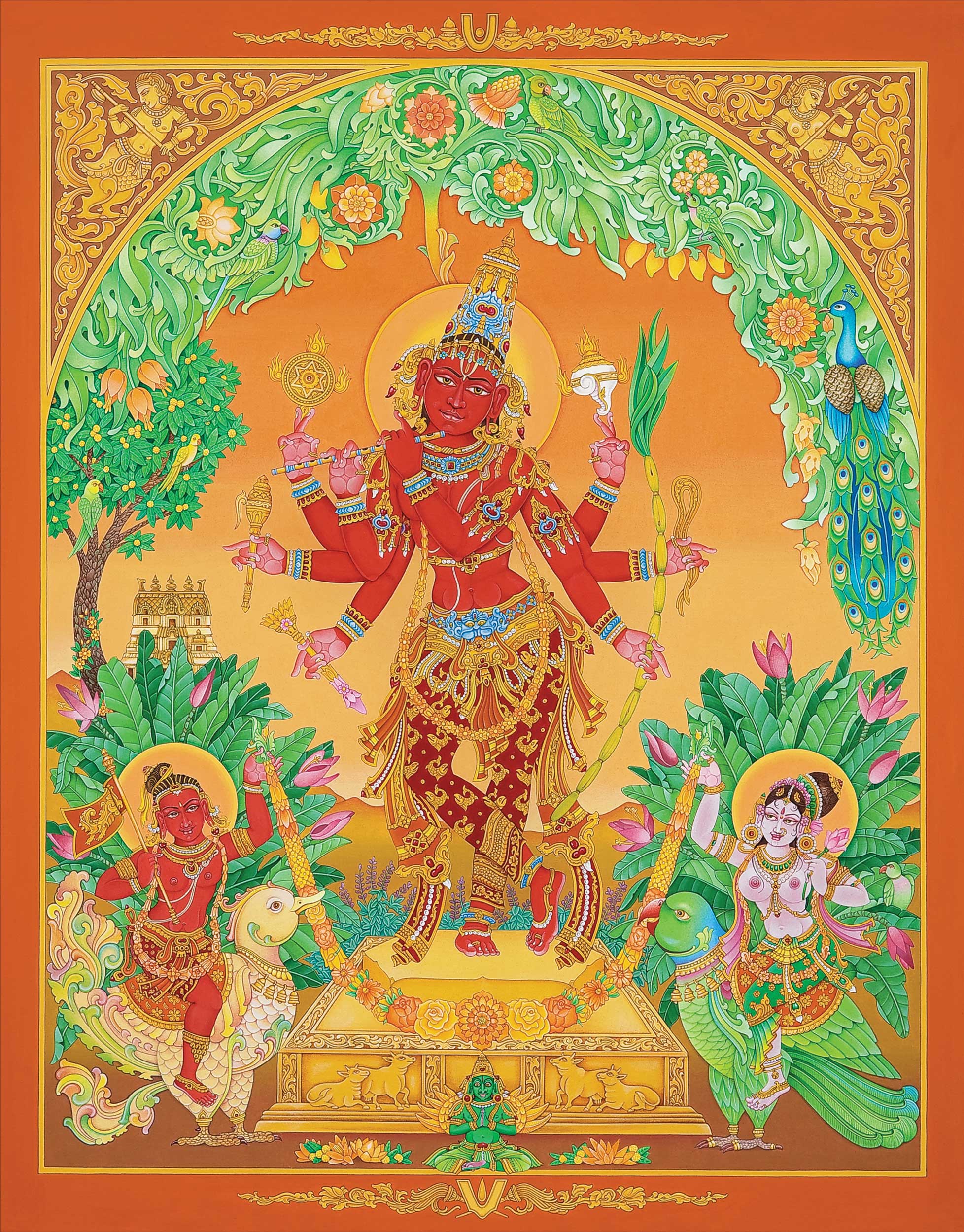 The form of Krishna known as Madanagopala is to be found in the sculptural programme of several Vaishnava temples of the Vijayayanagara era (fourteenth to eighteenth century) in southern India and, in particular, Tamil Nadu.

Madana is sweet enchantment, the seducer of the mind, and Gopala is the youthful herder of cows. In this form, Krishna has absorbed and subsumed the qualities of the god of love and sexual passion, Manmatha or Kama. The heats of lust and infatuation have been transformed into the rich rasa of transcendental love. Madanagopala sweetly sings and plays His flute, calling all to approach this exalted disposition – entering His world of luscious, enlightened duality where manifest form is the scintillating vibration of His eternal love play.

Madanagopala may be ten- or eight-armed and is depicted standing or seated upon a hexagon. As well as His flute, He carries various implements. Starting at the deity’s top right is the solar discus or chakra, the elephant goad/hook (ankusa) and then the flower arrow. From the top left, he holds the sacred conch (sankha), the three corded noose (pasa), and the sugarcane bow (ikshukodanda). The flower bow and arrow are both implements normally carried by Kama and his consort Rati, the goddess of pleasurable sensual enjoyment. Here, however, they are depicted as devotees of the Lord and they offer a garland of wild flowers from all seasons (vanamala). The single arrow held by Madanagopala is representative of Kama’s five powerful arrows of desire, each arrow representing a unique aspect of passion: excitement (unmadana), heat (tapana), drying up (sosana), paralyzing of normal bodily functions (stambhana) and full infatuation (sammohana).

The god of sensual love, Kama, is known by various epithets – Manmatha, Kandarpa, Madana, and Mara. Here He is shown on Krishna’s right. He holds aloft his standard – the makara banner from which Kama gets the additional name of Makaradhvaja, meaning that his flag is marked with the makara. It is symbolic of potent creation and fertility. Kama’s skin colour (nupura) is red, though variant forms are green or golden yellow. His father is Dharma Prajapati. The most famous mythological episode involving Kama is his having been burnt to ashes by Siva, whose meditation Kama had sought to disturb. Kama went on to be reborn as Krishna’s son, Pradyumna. He has two consorts, Priti (delight) and Rati (pleasure).

Rati is depicted on Madanagopala’s left. She is the daughter of Daksa Prajapati and her presence is likened to the youthful unfoldment of Vasant (spring) and with it, the longing in all nature for procreation. She is exceedingly attractive and well versed in seductive arts. Her hair is piled up into an elaborate ornamental knot (kesabandha), secured with a golden band decorated with fresh spring leaves and flowers. These impressive south Indian coiffures are to be seen on the figures of queens, princesses and high-ranking temple patrons.

As a pair, Kama and Rati are carved on pillars leading to the garbha griha. Their animal vehicles (vahanas), the goose, swan or parrot, are interchangeable. Lovely forms can be seen in the 17th century marriage hall (kalyana mandapa) in Kanchipuram’s Varadaraja temple. Outstanding even in the superlative world of Vijayanagara sculptural art are the splendid examples in Sri Villiputtar’s Andal temple complex. Here Rati sits astride a goose, admiring her own reflection in a mirror held aloft in her left hand, while the right holds a kohl stick.

Seated in the center at the bottom of the painting is Vishnu’s chief vahana, Garuda. He is shown as per his description in the Vishnu-dharmottara, with a body the color of an emerald, fierce bulging eyes and an eagle beak. There are many variant forms of Garuda – in North India one does not tend to see Garuda associated with Krishna, however, in the south, it is more frequent. In Vaishnava temples, Garuda is installed in a small shrine facing the garba griha (home of the main deity), or on a high pillar within the temple compound, or just outside the main entrance, as in Puri’s celebrated Jagganath temple.

Forming a canopy over Madanagopala’s head is the lush foliage of a Kalpakataru or wish-fulfilling tree. The tree boasts many types of flowers and fruits and is perpetually in bloom. It is a feature of the god’s celestial realms. Nestled within its foliage are several kili (parrots) and a mayil (peacock). Krishna cherishes both types of bird and is said to have several as pets. Midway to Madanagopala’s right is his favorite tree, the kadamba. It bears small, globular orange/yellow flowers with a beautiful perfume. In season, the flowers are much favoured for use as garlands. Growing at the Lord’s feet are a profusion of flowering sacred tulasi, a plant considered an incarnated goddess. Tulasi leaves are used as offerings to all Vaishnava deities and its wood is favoured for use in malas for mantra sadhana.

The two brown decorative panels at the sides of the arch display kinnaras. The term kinnara translates as something like ‘what are these?’ as they are a bizarre and beautiful com-posite of various creatures, animal, human and divine. They are usually shown playing musical instruments – especially, the veena. Kinnaras have intoxicating siren-like voices, but are aus-picious in nature and loving by disposition. They are often carved in light relief on temple pillars.

Lastly, within the orange border are two decorated friezes of the Vaishnava sectarian marking or Namam. The Namam is worn on the forehead and is typically of two forms (of course, there are variants). The form depicted on the upper strip is the Vadagalai which is U-shaped. The one on the lower strip is the Tengalai which is Y or V shaped. The central stripe between the U or V is known as the Tiruchurnam and is traditionally made of a lime and saffron mix or red ocher. The meaning of the Tiruchurnam is the same as that of the bindu: the whole-ness of divinity and the point of utmost potency from which all manifests. The wearing of the Namam is a highly important preparation for all kinds of ritual action or worship within the Vaishnava fold and is considered to be sanctifying for both the wearer and observer.