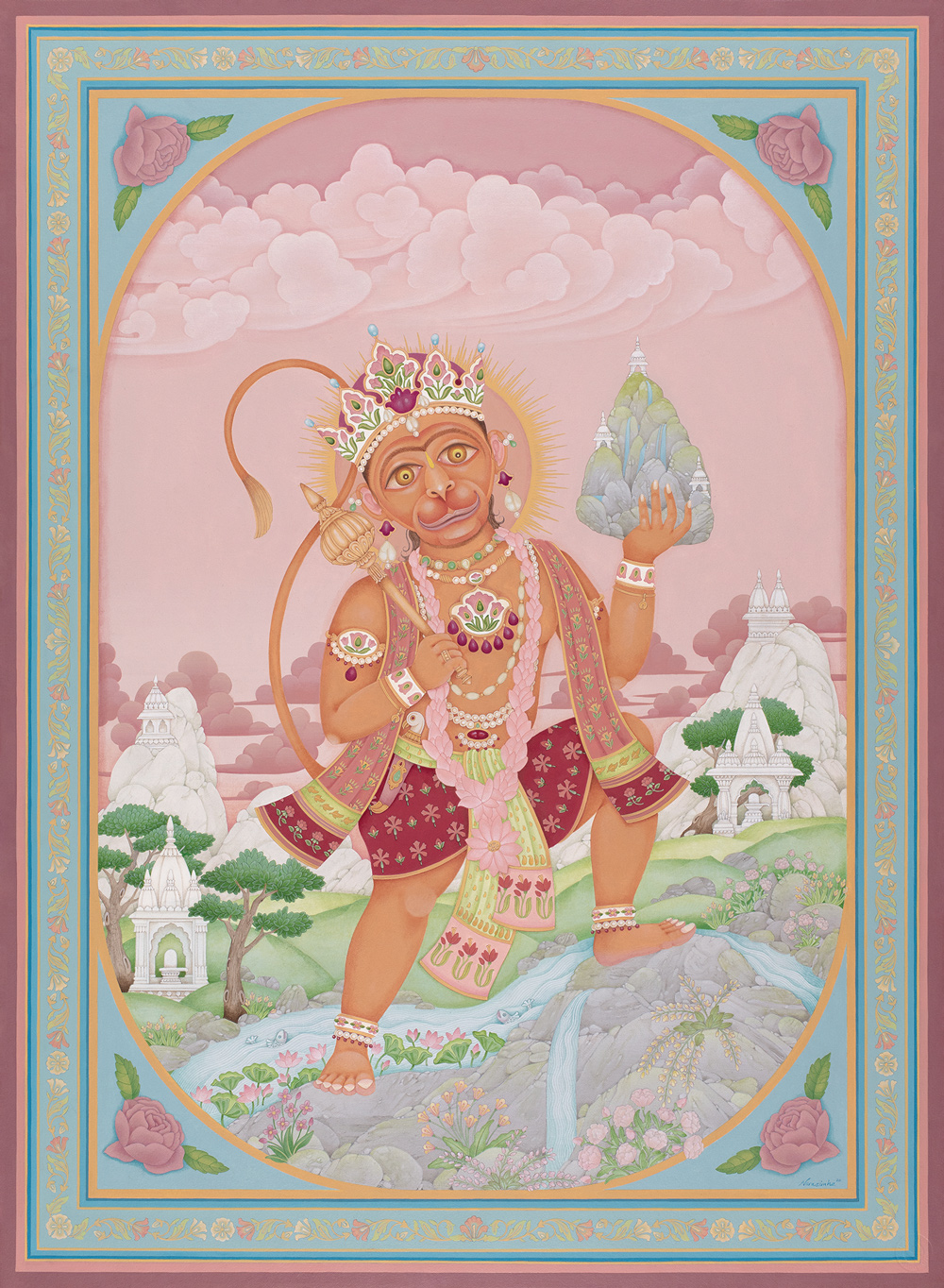 Next to Rama, Hanuman is the hero of the spiritual epic, the Ramayana. Esoterically, the story represents the regaining of divine consciousness from the forces of delusion (represented by the demonic king, Ravana). Sita, the beloved wife of Rama, is abducted by Ravana and a great search for her whereabouts ensues. During this search, Rama and his brother Lakshmana enlist the help of a valorous monkey, Hanuman.

Hanuman is, in fact, an incarnation of the great god Shiva and as such is perfect in all ways, except for one thing. Because of his mischievous exploits, the sages declared: “O monkey, illusioned by our curse, you will for a long time be unaware of your own strength, by dint of which you harassed us. Your strength will again grow when you are reminded of your glory.” His powers include the ashta-siddhis, or eight miraculous powers: the ability to enter another’s body; the ability to control all the senses at will; the ability to see the invisible; the ability to hear sounds from very far away; perfect memory and knowing all things; the ability to shrink and enlarge the body at will; and many more according to other interpretations of the siddhis; all of which makes Hanuman the ultimate accomplice in any kind of difficult endeavor. This is why he is so widely worshipped as a protector deity.

After receiving a sighting, Rama, Lakshmana, Hanuman and an army of animal helpers venture to Lanka where Ravana’s kingdom is situated. Hanuman leaps across the ocean in one bound, amazing all, and helps in the construction of a great bridge to assist in the invasion of Lanka. An epic battle ensues, during which Lakshmana is badly wounded and Rama is disheartened. However, the group learns of the existence of a rare and life-reviving herb, mrit sanjivani, found on the faraway Dronagiri mountain range. Rama’s physician, Sushena, sends Hanuman on a quest to bring back the herb to revive Lakshmana. Hanuman, now reminded of his powers, leaps into action and with superhuman speed reaches the mountain range. After identifying the correct mountain, he is confused as to which herb is the sanjivani, so, not wanting to waste any time, he uproots the entire flank of the mountain the herb grows on. Hanuman carries it back to Sushena, Lakshmana is fortified, and the battle to rescue Sita recommences.

In the painting, Hanuman easily lifts the mountain side with his enormous energy and, in devotional fervor, prepares to bring it to his beloved Lord Rama. Hanuman epitomizes devotion and dedicated action. He is an ideal of selflessness; we find in him every quality that is strong, good, and bright.

The painting is in a late Pahari style, which means it has a touch of Anglo influence, i.e., in the chintz-like color scheme with the presence of roses. The original painting uses paints mixed with sacred waters from the Ganges, Pushkar Lake, and Hanuman Tal in Chanderi, Madhya Pradesh. All these bodies of water are famed for their spiritually charged powers.