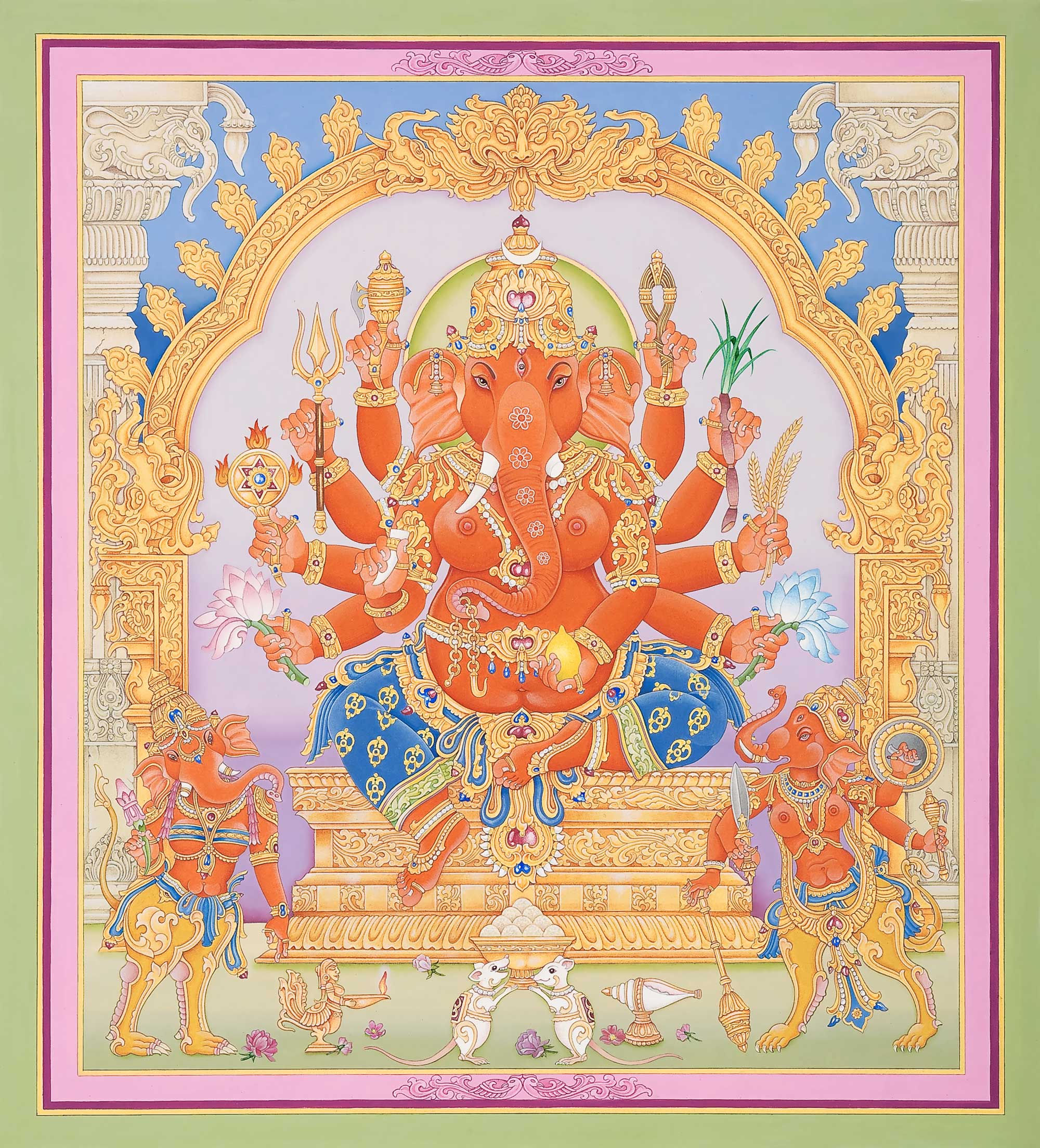 India is home to a variety of little-known images of an elephant-headed Goddess. The first currently known dates from the 1st century BC and was excavated in Rairh near Jaipur. It is a small terracotta and very rough. Although its identification is disputed, one can certainly make out her image in the worn terracotta if one wishes to! Such two-armed figures are sometimes considered to be Yaksis – magical, female, nature spirits. Also, there is the elephant-headed Yogini included in the iconographic programme of the tenth century Chaunsatha Yogini temple in Hirapur, Orissa. In various Puranas, groupings of such Yoginis are usually given as 64. The earlier conception of these forms is that of powerful, dangerous, dreaded beings to be placated and worshipped as grantors of magical power and averters of disease and witchcraft. Much in the same way as Grama-Devatas are regarded in small villages throughout India. These Yoginis are shown with all kinds of animal heads – snake, crane, goat, buffalo, lion, vulture and many more, including elephant. So it would seem that this is a separate identification to that of a female form of Ganesa. Of course, this is India and categorizations merge. The later conception of the Yoginis is that of emanations of the Great Goddess Devi or servants of Devi. The Kalika Purana mentions ten million such Yoginis.

A feminine Ganesa may perhaps be a later conception arising with the explosion of Ganesa’s popularity in medieval times. The Devi Sahasranam includes names of such feminized forms as Lambodari, Ganesvari and Vainayaki. Up until now, iconographic scholars who have written on the subject have been silent or unaware of a spectacular ten-armed form of Ganesani painted on the sactum wall of the 19th century Siva temple in Parayil, Kuttipuram, Kerala. This image is of particular importance because no other ten-armed form is known – all recorded so far are two-or four-armed. Not only this, but her iconographic attributes are nearly totally undamaged and visible. Ganesani is seen to be holding clockwise from her bottom right hand, her broken left tusk, a pink lotus, chakram (discus), sula (trident), either an ankusa (elephant goad) or mazhu (axe) [there is some damage to the mural just where the blade of either implement would be present], pasam (3-corded noose), sugar cane, ripened grain, a blue lotus and a fruit – possibly mango or citrus. In addition, Ganesani holds a golden chain in her trunk. The trunk is right turning, which is said to indicate that the deity is suitable for tantric worship. Her skin is vermillion and she wears a blue dress.

For the painting, I have translated this mural from the simplistic but powerful Keralan style into the more visually complex Tamil idiom. The issue over the object held in her upper right hand being an axe or goad is resolved by depicting an implement that could serve both functions. That Ganesani is three-eyed and holds her broken tusk can only point to her being the female counterpoint to Ganesa as opposed to her being solely an independent Yogini, Matrica, or nature spirit, as some writers have suggested. Furthermore, in the ten-armed form at Kuttipuram, the skin coloration matches that most popularly seen in Ganesa – vermillion , but also, the Deity wears the crescent moon on her crown. In addition, all of her implements are those commonly held by South Indian forms of Ganesa. One further irrefutable piece of evidence toward a definite identification of a female Ganesa is the very recent discovery by Dr. J.N. Pandey, History Prof-essor of Allahbad University of a rock –cut sculpture of Ganesa seated with Ganesani at His side.

In the Vijayanagar period, Tamil Nadu gives rise to the visually arresting form of Ganesani with the legs and feet of a lion (Vyala) or tiger (Vyagra). The two-armed Vyagrapada Ganesani in the bottom left of the painting is from a stone relief within the Madurai Sri Minakshi Temples, Kambattadi, Mandapa. A similar form is also seen at Chidambaram’s Siva Nataraj temple. In our form, the Deity’s left arm is hanging by her side in dola hasta (mudra) whereas Chidambaram’s Vyagrapada Ganesani extends her left arm out in dance posture. Both hold lotus buds (Vyagrapada) in their right hands. Why Ganesani has the lower half of a tiger or Vyala is an unknown as no textual description has been discovered as yet. However, it is interesting that Chidambaram has historically been known as Puliyur (Tigertown) due to Goddess Kali’s patrolling the vicinity with the help of a tiger. The great devotee of Siva Nataraj, also known as Vyagrapada, is given his tiger legs as a boon from Siva. This was to enable him to better reach the flowers (from the tree tops of the ‘tillai’ forest of Citamparam) he required for puja. Vyagrapada Ganesani, on the lower right of the painting, is from a wooden sculpture at Tirunelveli’s Nelliyapan temple. She is marching forward with gadai (mace), udaivall (sword), kedaya (shield) and ankusa (goad). Not all Tamil forms of Ganesani are tiger-legged – a four-armed version is shown in relief at Suchindrams Sthanumalaya temple within the Chempakaraman Mandapa seated on a throne in lalitasana with her left leg extended.

Clearly, these are exciting times for the iconographic study of Ganesani and no doubt, further discoveries are to be made as She Wills. In my own research, I tentatively propose that the Goddess currently identified as Sharada, who is seated on the lap of the peacock-mounted, three-trunked Ganesha (housed within the 18th century Trisunda Ganapati Temple in Pune), may, in fact, be Ganesani. This is due to what could be interpreted as Her having a trunk, rather than Ganesha possessing an overly elongated trunk on his left, in comparison to the central and right trunks. She can also be identified as Ganesani because of her pot belly and third eye. Anyway, it is an altogether highly unusual icon, as the peacock-mounted Mayuresvara Ganesa is, in every other case I know of, shown with one trunk.