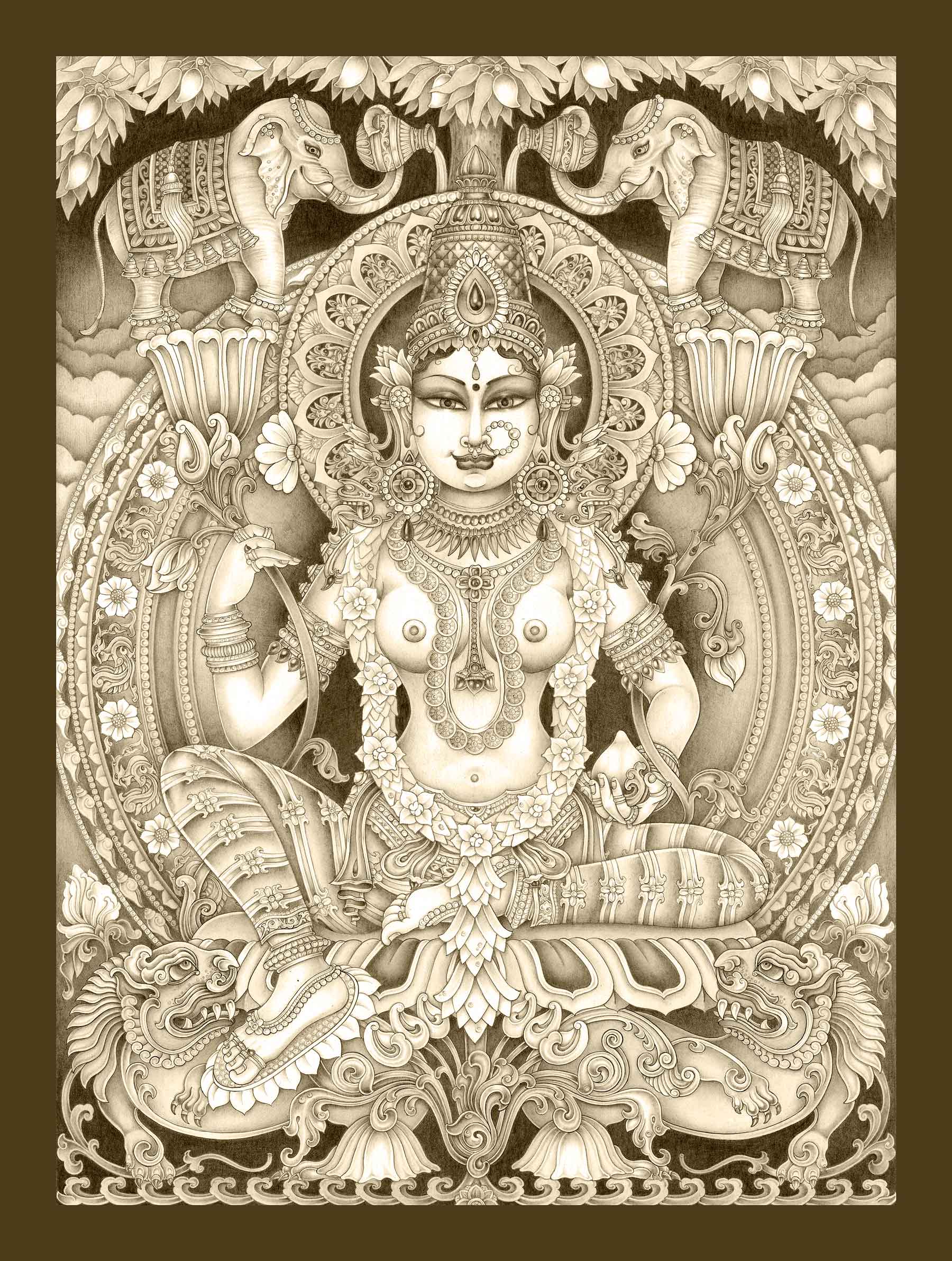 Like all of those we could conveniently call Hindu deities, Lakshmi has more than one identity. In the Lakshmi tantra of the Vaishnava Pancaratra sect, she is simply “everything.” In chapter 51 she states, “With myself as the substratum, I voluntarily evolve this entire universe.” As the inseparable consort of Vishnu Narayana, she is known as Sri, and ever resides upon his holy chest.

In this classical image of Lakshmi lustrated by elephants (gaja), her regal splendour is emphasized. She is the grantor of great wealth, nurturance, beauty and fertility. In India the elephant is long associated with the heavy, blue-grey clouds of the monsoon season and hence, the bountiful harvest of nature – giving sustenance and material wealth. The act of abiseka (bathing with auspicious substances and nectars) is an important and principal mode of venerating the divine within Indian modes of worship. Historically, Gaja Lakshmi was invoked during the consecration of Indian kings as she herself is the source of all royal power. This queenly aspect is stressed by her residing on the lion throne.

Abundant lotus flowers surround her – another name for Lakshmi as Mahavidya is Kamala, meaning lotus. In common with the solar divinity, Surya, she holds aloft two mighty lotus blooms. A popular expression referring to her great sensual luster describes Lakshmi as “lotus-eyed, lotus-sighed, and lotus-thighed.” In the Srisukta she is given the epithet of Padmasambhava, “born from a lotus.” In her aura we see bizarre composite animals known as ramagaytri’s, in this instance, elephant-headed geese. They offer still more open lotus flowers.

In short, Lakshmi is the nourishing essence of existence, the pleasant milk of the mother’s breast. . A lush canopy of mangoes appears above her, symbolizing her bountiful fulfillment of wishes. The ripe mango she holds in her left hand is again demonstrative of her supreme, natural generosity, the mango being the sweetest and most delicious of all fruits.

Nearly all Hindus maintain a shrine to Lakshmi in their places of business and in their homes for domestic harmony. At work, that shrine may be no more than a sticker on the cash box. Business does not commence until she has been invoked with incense and light as she also protects from Alakshmi, misfortune and strife.