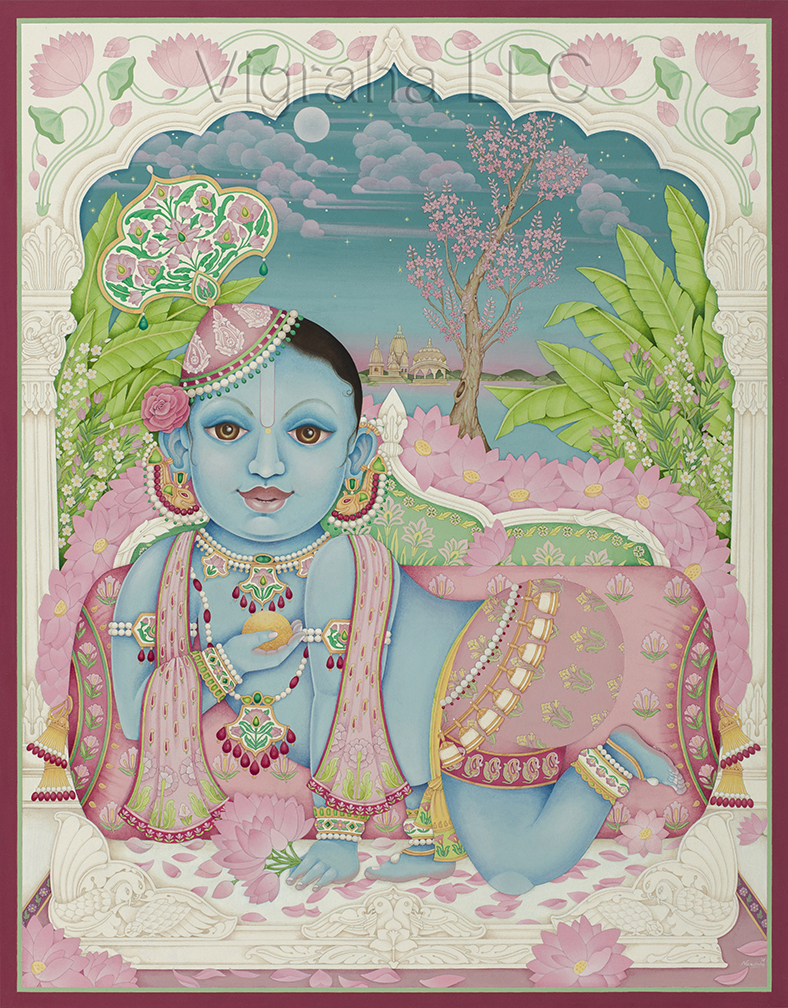 I take shelter with Him who removes the sins of the Kali Age,
who is the home of Lakshmi,
who is an affectionate child,
who’s body is tempting because of His lovely eyes.
Who is the color of blue water lilies, bees, dense rainclouds and tamala trees,
who is death, it is said, to the demon race.
Who plays happily.

Under a full moon, baby Krishna is shown in this typical posture with a sweet ladu or butter ball held aloft. This form is sometimes known as LaduGopal or Navanitapriya—fond of butter! The painting evokes the shringara or decorative mood/bhava of soft pink lotus flowers, they adorn His throne and the petals are strewn about. Other colors in the painting are simply to highlight the extensive use of pink seen in Krishna’s clothing, crown, flower blossoms and jewelry. His jewelry is in the pink enamel (gulabi mina) style famed, up until recent times, from Varanasi.

In Bhakti Yoga, there are five kinds of Bhava, or mental attitudes in worshipping the Divine. One of the five Bhavas is the amazing tradition of worshipping God as a Child or Infant. This Vatsyalya Bhava finds its ultimate expression in the mood of parental love toward the Sweet Krishna as a child. One of the most attractive features of this Bhava is that the devotee becomes the parent of Krishna and must overcome all fears and selfish motivation in the worship of the Divine Child. This path is frequently found in the followers of Vallabhacharya. It is a straightforward and playful path of Bhakti, full of bright innocence and free of the usual adult concerns. Other deities also have their Bal (child) forms such as Bal Hanuman, Rama Lal, Bal Shiv and Bal Ganapati, but the cult of Bal Krishna is by far the most developed.

In relatively contemporary times we have the examples of both Ramakrishna Paramahansa and his devotee Aghoramani Devi as having reveled in this Vatsyalya Bhava. Aghoramani Devi was a poor brahmin widow known as Gopal Ma (Mother). After decades of dedicated mantra sadhana Krishna appeared to Gopal Ma in the form of a mischievous little boy who would engulf her is bliss and ecstasy. Her heights of mystical absorption into Krishna’s child lila was such that Ramakrishna told her she had accomplished all that was to be attained. That bliss filled form of Bal Krishna accompanied Gopal Ma wherever she went, visible to her subtle spiritual attainment and that of Ramakrishna. When she visited her Master, Krishna would crawl into Ramakrishna’s heart and on leaving Gopal would crawl out as to accompany His Mother. Her tremendously inspiring story is told in Swami Chetanandas book on the life stories of various Ramakrishna devotees, “They Lived with God: Life Stories of Some Devotees of Sri Ramakrishna”.

In the Path of Grace (Pushti Marg) established by Shri Mahaprabhu Vallabhacharya, there are several celebrated statues of baby Krishna known as Svarups. These tiny images are housed in elaborate havelis filled with devotional art, music and festive seva. One such image Sri Navanita Priyaji has his own mansion within the massive sprawling haveli of Shri Nathji, the cults premiere icon in Nathdwara, Rajasthan. Navanita Priyaji means the one who loves fresh butter. The tiny svarup is dressed in fine seasonal outfits, fed the most scrumptious food lovingly prepared and generally pampered and adored with music, poetry and playful festivities. It is known that Krishna bestows Grace on those who affectionately worship his forms with dedicated hearts and motive free joy. Such Grace is considered the highest reward in human existence and beyond bargaining for liberation!